Communicating and working with Aspergers 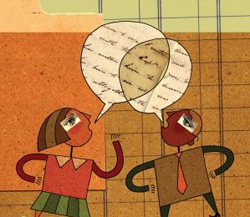 There is an important NLP premise I hold dear: the meaning of the communication is the response it elicits, separate from my intent.

I believe the truth in this dictum completely, down through my bones. That belief, however is rather poignant, given my communications problems: as an Asperger’s sufferer I sometimes unwittingly communicate in ways that harm, confuse, or annoy. And knowing someone has been harmed because of my inadequecies is deeply painful.

It’s not that I don’t try. I’ve had massive amounts of therapy, coaching, group work and I’m a million times better than I was growing up. I’m able to maintain friends and clients, and a quasi normal life. But damn, I daily find myself  losing business, or saying things I didn’t realize were inappropriate.

In a recent episode of my favorite Parenthood TV show, my little buddie Max (a 12 year old with Aspergers) is being ‘mainlined’ and had his first day in normal school with normal kids. He kept shouting out the answers to everything because, well, because he knew them. The frustrated teacher said,

“MAX. You MUST raise your hand first.”
So he raised his hand and kept shouting out the answers.
“MAX. You can’t speak until I call on you. When you raise your hand you’re just teling me you have the answer.”
Max stopped and looked up quizzically:  “You didn’t say that. You just said to raise my hand.”

ASPIE’S MEAN NO HARM: THE WORLD IS JUST A LITERAL PLACE

That’s what the world is like for me. Everything is literal. You make an appointment, I plan on you keeping it unless you tell me you’re cancelling. Once you don’t keep the appointment and don’t let me know, I actually sit and wait, watching emails come through for days, trying to figure out what I did wrong.

Or when I respond in what I think is a helpful way, only to discover it’s not helpful. I get confused, and beat myself up for harming you.

It’s never an Aspie’s intent to harm. The world just looks different to us. Tell me: how can I explain to someone that I just might say the wrong thing – and I have no intent to harm…but my world is not the same world you’re living in. How can I help folks understanding that at the beginning of relationships? My long term friends love me WITH my idiosyncracies, and laugh together (There she goes again! or Boy that hurt… truthful, but ouch. or Sharon-Drew! Breathe. It will be ok.).

One of my long standing clients was handing me over to another division, and I overheard the new man say to my old client: “Is she always like this?” to which he replied, “Yes. And you’ll learn to love her.”

Thankfully there are enough folks who recognize my good qualities, and find me charming. And there are plenty in business who love me for my brains and overlook my idiosyncracies. Given what I’ve read about Einstein’s personality, it’s a good thing he had brains.

But I sure hurt for those who don’t understand or forgive my idiosyncracies, or match the good against the bad, or possibly realize I wouldn’t have the brains to think so far outside of the box if it weren’t for the issues on the other end.

I really want my communication to serve, to nurture, to nourish. I keep trying, and succeed very very often indeed. I just have such sadness for those times I fail.

Learn Buying Faciltiation® with Sharon-Drew in a classroom setting, or through individual learning.

8 thoughts on “Communicating and working with Aspergers”