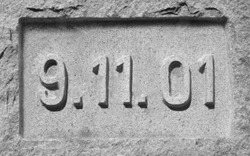 This is the week we are all remembering our national pain, the outrage we all experienced when we lost our innocence ten years ago.

The horror of 9/11 was obviously an unspeakable trajedy. I’d like to use the memory and sadness we all share to add another dimension to this discussion, and possibly – with the brilliance of hindsight – move this into a spiritual discussion. Note, I do not want to make light of the trajedy of lost lives, but I would like to open the conversation for further consideration.

Let me start by saying that I’m a Buddhist. I even bring moths outside to fly away. I consider life a blessing, and absolutely cannot understand why anyone would want to harm another person, whether to kill them, maime them, or even harm them through mean behaviors or inappropriate, hurtful words.

I believe that killing others doesn’t help the world heal (And, yes, you could possibly convince me that Bin Laden needed to die.), and rarely fixes disputes.  But to me, there has been far too much unnecessary collateral damage and lost lives in the world’s history of war. So many innocent lives lost. So many refugees with kids not getting schooled and stomaches not being fed. So many husbands killed, and mothers separated from children. So many children raped or dead from starvation. So much potential lost.

When we look at the histories of any of the Superpowers (including US), history is fraught with killing. We kill for political reasons, personal reasons, human reasons. Countries have invaded other countries and cause lives to be lost, people to flee from their homes, resources to be lost rather than shared… The history of most countries includes a history of war, killing, raping, mutilating. From biblical days to the present, so much war and killing.

Rome, Nicaragua, Greece, Panama, Russia, Darfur, China… the list goes beyond boundaries and time. And no one is spared – neither the abusers or the abused, the initiators or the victims, those who die, or those who come home with lost limbs and shattered brains and lives. … more victims than we’d like.

The Sunday New York Times this week had an editorial on the price of war (The Long War’s Price in Hatred) that made the folling points:

“War diminishes everyone and all states, even the victors, and that is especially true if the war is characterized by broken promises and dashed hopes, perceptions of betrayal, and disappointment in the ally. For the people living in the theater of war, the litany of such disappointments is long.”

I’d like to bring our national tragedy beyond just us, into the global environment. Is there any way we can all stop harming each other?

Any thoughts on  how individuals, like me and you, can make a difference? How we can use this tragedy to make the world a better, safer place?

To learn how to create the sort of dialogue that supports your client interactions, take a look at Dirty Little Secrets. It’s more about the collaborative communication than being ‘right’ or ‘wrong’.