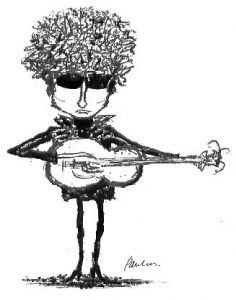 I recently heard two young DJs chatting on the radio, discussing Dylan and the Beatles – you know, those old guys who used to be young and famous.

They discussed the time Dylan fans got angry when he began playing the electric guitar and wanted him to go back to the acoustic (Dudes – we didn’t have Acoustic Guitars! We had Guitars!). Along the way one of them sang, “I wanna hold your haaaaand” and the other said, “Yeah. I guess that was all you could do in those days.”

I’m here as the voice of Those Days. I will now officially represent all of us who are over that certain age we thought we’d get to and be dead, or at least wobbly. I will now take up the gauntlet for those of us who are cool, smart, beautiful, fun, sexy, fun, sexy, fun, creative, and successful. Did I mention aware, awake, alive, playful, and wise? And unwilling to put up with BS. And by golly, we know what we want and have no qualms about making our voices heard. What’s the worse that can happen?

So you younguns who think you invented music and drugs and sex and cool….. wake up. If it weren’t for us

you wouldn’t be inventing your technology or writing your books or having such an advanced stage of arrogance that we are forced to either laugh or cry when you point your disdain our way.

America is the only country that does not recognize and revere their Old Ones, and what a waste.  CEOs are too often happy to get rid of those who have been around from the beginning, forgetting that they are the foundation, the story, of your business. Teens think we don’t understand their needs for drugs and early sex and disregard parents who are attempting to serve. New tech geeks think we can’t use computers or come up with visionary ideas. The good news is our brains are so full of life and lessons that we can not only see the forest for the trees (so to speak), but know how to cut them down with ease and not care if anyone gets annoyed by it.

So how do we all exist together for the next 30+ years as my generation ages? How do we use our joint brilliance (ours because we came up the long hard way, yours because you are our legacy) to see both sides of the equation – the male and female, old and young, stable and risky, the past and the future?

Imagine a world where all possibilities are truly in front of us.

Let’s make ‘those days’ these days. Now, how do we do that?

Read sample chapters of Sharon-Drew’s latest book on how decisions get made.