Trust: what it is, and how to initiate it 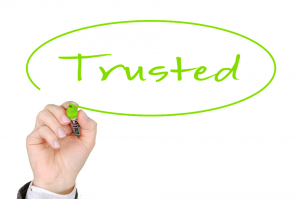 Trust. The big kahuna. The sales industry seeks it; doctors assume it; couples demand it; change can’t occur without it. But what is it? Why isn’t it easier to achieve? And how can we engender it in relationships?

I define trust as the awareness of Another as being safe, similar, and sane enough to connect with, and occurs when they

Unless these criteria are satisfied, trust can’t occur no matter how kind, professional, necessary, or well-intended another person or message is. It’s a Belief issue.

Every one of us has Beliefs unique to us. Our Beliefs are the norms and rules we live by, developed over our lifetimes to make decisions and act against. Right or wrong, everyone’s Beliefs are normalized, unconscious, and unique, certainly unknowable to an outsider.

We gravitate to, and trust, folks with similar foundational Beliefs and world views that match well-enough with our own to proclaim “safety”. The problem occurs when our world views collide.

Largely unconscious, illogical to others and hard to change, our Beliefs have been created during the course of our lives; they regulate us, define who we are and enable us to show up congruently in the world. We even listen through ears biased by our Beliefs.

Beliefs instigate our habits and assumptions, restricting our life choices such as our occupations, politics, values, mates – even our child rearing practices. And our Beliefs are the initiators of our behaviors – behaviors being Beliefs in action.

Sadly, because everyone’s Belief systems are unconscious and idiosyncratic, and because we each view the world through our own Beliefs and perceptions, it’s difficult to accurately perceive Another’s internal world view.

For those folks whose jobs are to influence, there’s an immediate problem. The content they share, or even their unique delivery style, may unwittingly offend the Belief system of the Communication Partner (CP). Bad news for sellers, coaches, managers, etc. who attempt to promote change or buy-in by expecting their ideas to be accepted, but instead cause resistance and distrust.

I’d like to offer thoughts on some of the ways we fail when trying to engage trust, then provide some ideas of how to stimulate it.

Relationship Building: We’ve been led to believe that having a relationship encourages buy-in to new ideas. But it’s a conundrum: polite as an interaction appears or how necessary our message, we can’t easily build a relationship with folks with divergent Beliefs, or fight their automatic filters that react to us immediately. In other words, “pushing in” doesn’t work, even if our data and intent are accurate, and even if we think we have a relationship that entitles us to ‘share.’ We might have a superficial connection, but not a relationship; “making nice” does not constitute a relationship, or engender change or trust.

Information: As influencers we often attempt to “get in” with the information we assume our CPs need, without accounting for how it will be perceived. Sometimes the “right” data inadvertently tells our CP that they’re wrong (and we’re right). We fail to realize that our CPs only understand our intent to the degree it matches their Beliefs, or how their listening filters translate it for them. With the best will in the world, even with good data to help folks who need what we’ve got to share, we aren’t heeded.

In fact, information is the last thing needed to facilitate change or buy-in since people unconsciously defend their status quo. It’s our brain’s fault! Because all incoming data is translated for us automatically by our historic neural circuits, new ideas aren’t always interpreted accurately and run the risk of causing resistance. (See my book on this topic.) So save the information sharing for when a clear path to mutual Beliefs and trust has been developed.

Think about it: if you’re an environmentalist, the “rational/ scientific” data you offer to “prove” climate change won’t persuade those who disagree; if you’re a proponent of the medical model, you won’t use alternate therapies to manage an illness no matter how strong the data for changing your nutrition.

Clear Communication: We all think we communicate clearly, yet we’re not as effective speaking in ‘Other’s language’ given our CPs unconscious, biased listening filters that end up preventing our “risky” data from being heard accurately. Certainly we believe we’re choosing the “right” words and approach to convey our intent. Yet our message is heard accurately only by those with similar Beliefs and resisted by the very people who need our information the most.

Since our great ideas and eager strategies don’t engender trust in folks with different Beliefs, and without trust we can’t change minds, what should we do?

As coaches, sellers, and leaders, we must carefully initiate conversations based on them discovering their own excellence, with a goal to match their Belief criteria before offering new ideas. In this way we can help our CPs open up new possibility that actually creates trust:

In other words, create a Beliefs-based bond that will open the possibility of you offering information later, once they’ve discovered exactly where they need it and how to use it.

I’ve developed a new form of question (Facilitative Questions) that teaches others to scan their own internal state. These questions are unbiased, systemic, formulated with specific wording, in a specific order, and based on systemic brain change, not information gathering. They also take our CPs into a Witness state, beyond their automatic responses, and from which they can have a neutral, unbiased look at their status quo to notice if it’s operating excellently, and consider change if there might be a more congruent path.

Take a look at a conventional question vs a Facilitative Question:

Conventional: Do you think it’s time for a haircut? or Why do you wear your hair that way?

Facilitative Question: How would you know if it were time to reconsider your hairstyle?

This leads your CP

By using this type of question we offer a route for the CP to discover their own best answer that aligns with their Beliefs and engenders trust. No push, no need for a specific response. Serving another by helping them discover their own Excellence.

I designed these questions as part of my Buying Facilitation® model, a generic change facilitation model (often used in sales) that enables congruent change. Sounds a bit wonky, I know, and it’s certainly not conventional. But worth researching. I’ve trained large numbers of sales folks and coaches over the past 40 years against control groups and consistently have a 40% success rate. When we facilitate our CPs down their path to conscious choice, we

Until your audience is able to accomplish this in their own way, using their own Beliefs, they will hear you through biased ears, maintain their barriers, and engender trust only with those who they feel aligned with – omitting a large audience of those who may need you.

Stop using your own biases to engender trust: facilitate your CPs in changing themselves. Then the choice of the best solution becomes a consequence of a system that is ready, willing, and able to adopt excellence. And they’ll trust you because you helped them help themselves.

2 thoughts on “Trust: what it is, and how to initiate it”