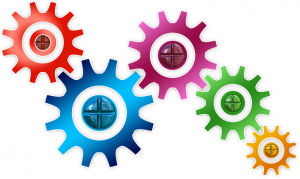 As a Change Facilitator, I often get asked about the nature of decision making, change and buy-in. Since my responses seem surprising in their laser focus on systems, I thought it might be an interesting conversation to start among influencers: what role do systems play in change? I contend that unless we understand systems we can’t hear others without bias, can’t pose pitches or try to influence others, can’t effectively design or implement projects and project teams, and can’t effectively maintain relationships.

To that end, I’ve jotted down a few of my favorite ‘laws’ of systems that might help explain my intense respect for them, and provide you with baseline truths of how our status quo rules our behaviors, how our beliefs and decisions are tied together, and why it’s so difficult to change anyone’s mind.

Here are my thoughts on how and why systems are not only central to change, but the glue that makes the status quo so substantial and change so difficult; at the end, I offer an approach to enable congruent, inside-out, permanent change.

Systems are the core – the foundation, the status quo – of congruent human structures (people, teams, companies, families) and are based on every element within them agreeing to the same rules and beliefs that specify the operating rules for behaviors. (It’s obvious. Do you think IBM and Google and Uber all operate out of the same foundational rules and operational beliefs?).

This system gets up every day and replicates itself so it not only recreates the status quo, but maintains it. All systems resist, and potentially misinterpret, anything from outside that threatens it. Until or unless there is a systemic understanding that there will be no/minimal disruption – certainly no change without buy-in from the elements – change will not occur.

Each system (each family, each person) is unique and idiosyncratic, unknowable to an outsider due to its unconscious nature, history, patterns, and Hierarchy of Beliefs and rules.

For those of us in sales, coaching, healthcare, leadership, consulting, or any type of change management, we often use content/information (initiatives, information, Behavior Modification, education, pitches, marketing, advice, etc.) or our own intuition and needs for the Other as the means to invoke change, assuming that offering the right data, in the right format, will teach someone to do something differently.

Yet change doesn’t happen as a result of information, regardless of how critical it is, unless the system has already determined its willingness and ability to change congruently, with buy-in from all effected elements. Change only happens systemically, when the foundational beliefs are ready, willing, and able to change. Until or unless the system learns how to facilitate and incorporate new congruent choices, or reprioritize the existing Hierarchy, change cannot occur.

Conventional practices include posing conventional (biased) questions asked to elicit answers as per the Asker’s needs and curiosity, filtered through their biased listening, directed toward behavior change (rather than belief change) that they want to see occur and use biased content to convince/influence/rationalize the system to acquiesce. In other words, the approaches we’re now using won’t affect systemic change unless the system was already poised to do so.
Change only happens when the system has already agreed, and knows how to manage any change so there is no disruption (or there will be automatic resistance); change cannot happen when the system believes it will become unstable as a result.

A good rule of thumb: no one, and nothing from outside the system can change it so long as conventional questions and curiosity, biased content or convincer strategies, are used. Systems must change themselves from within. This is the reason why sales closes such a small percentage of prospects, why coaches have permanent success with so few clients, and why 97% of all implementations fail. I’ve written an article on why ‘push‘ doesn’t work.

And this is why change appears to be so hard. It’s not. We’re just going about it ineffectively. By merely attempting to change behaviors, we actually cause the resistance we get, only capture those who are ‘ready’ (the low hanging fruit), and miss an opportunity to facilitate and enable those who CAN change.

I’ve developed a Change Facilitation model (Buying Facilitation®) that manages congruent change through a unique skill set, including Listening for Systems and formulating Facilitative Questions (using specific words, in a specific order; directive and action inducing, not information driven or biased) that enable a system to discover its own route through to congruent change and its own brand of excellence. Different from conventional sales, coaching, etc. that run the risk of pushing change, facilitators enable the system to change itself, with no bias from the influencer, and results of greatly enhanced success.

For those ready to add a new capability to their current influencing practices, I’ve designed several approaches, from self-guided study, to learning programs, to coaching. Let me know of interest.

Sharon-Drew Morgen is a breakthrough innovator and original thinker, having developed new paradigms in sales (inventor Buying Facilitation®, author NYTimes Business Bestseller Selling with Integrity, Dirty Little Secrets: why buyers can’t buy and sellers can’t sell), listening/communication (What? Did you really say what I think I heard?), change management (The How of Change™), coaching, and leadership. Sharon-Drew coaches and consults with companies seeking out of the box remedies for congruent, servant-leader-based change in leadership, healthcare, and sales. Her award-winning blog carries original articles with new thinking, weekly. www.sharondrewmorgen.com She can be reached at sharondrew@sharondrewmorgen.com.