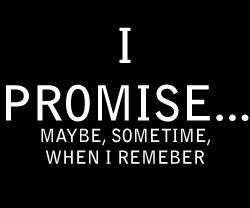 I don’t get it. Why do people make promises and then not keep them? I suppose they are well intentioned, but it just confuses me terribly.

I have non verbal learning disorder (nvld) which is a high-end version of asperger’s. That means I don’t always understand nuance. Now, after years of dealing with this, I’ve learned what to expect,what something should look/sound/act like, and I can cope in a reasonably intelligent way.

But when all of the ‘rules of engagement’ have been met, and it seems to me something should be taking place and then it doesn’t, I go into a very confused place and assume it’s my fault for not understanding. What did I do wrong? What did I say wrong? What did I understand wrong? I spend countless hours racking my brain, pulling apart words and expectations, trying to figure out my culpability. It’s been happening a lot lately, and now I’m thinking that maybe, just maybe, people are being unwittingly disrespectful.

Here are a few things I’ve heard over the last month or so that I actually believed:

I’m out next week, but when I return, I’ll contact you and we’ll figure out a way to do this. It’s important for my company and my clients. I’m excited. (And that was 3 weeks ago, with no further responses to emails.)

I love your stuff!  I have clients who need it and I want you to meet. I’m out of the country, but in 2 weeks when I’m back, let’s have a chat and I’ll give you some people to call who will be eager to meet you when you’re in Boston. (And then the person disappeared and won’t even accept an invitation for a meal.)

I am in the middle of your book. It’s great. I’ll finish it in a day or so. Let’s speak Monday. I have some ideas, both for my company and colleagues; let’s figure out the next steps to make Buying Facilitation™ available for them. (And the person never took the scheduled  call, and weeks later responded to my note saying he’d be out of pocket until October.)

Wow! You can do that!? I appreciate you sending the book. Once I get it, I’ll read it and then we can sit down and figure out how to have my consultants start to incorporate it into our client work (And, 3 weeks later the meeting time was cancelled with just a brief note:  ‘Sorry. Won’t be able to meet when you’re in town.’).

This is just from the last month. I can go on for pages. And frankly, I’m confused. Did I do something/say something wrong in an email? Did the people get busy and forget? Did they end up hating my book? Did they just say something initially to try to make me happy and then not remember? Did they start with good intentions and then run out of time or care?

We have email now. People don’t have to send a letter, or hire a horse and buggy, to get a message to me. A simple “I’ve gotten busy, Sharon-Drew. I know I promised we’ll speak, but it won’t be possible until the week of Sept. 15. You around that week?”

That takes about 10 seconds to write. Would save me tears and hours of confusion. Not to mention it would be respectful and responsible. Others who don’t have the communication/nuance issues I have may just not care. If I were a good Buddhist I wouldn’t even remember, and just stay in the present with whatever shows up.

But me? What to do I do? With my nlvd I put a date into my mental calendar, and then expect ‘it’ to happen because I was told it would happen. Rather simple, really. I always do what I promise – always – or get agreement to change the agreement. Am I being naive here? or just incapacitated?

Why can’t people just do what they say they’ll do? Just asking.