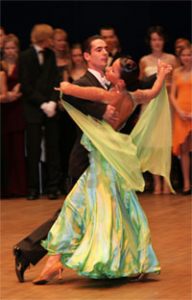 As many of you know, I’m a dancer. I began dancing when I was 8, standing on my father’s toes as we (my mother was relegated to dancing with the instructor) learned Latin dancing. When I was 10 took ballroom dancing classes, and at age 11 I was a ‘regular’ on Connecticut Bandstand (I even got fan letters!).

At different times in my life I taught Cha Cha (!) and became the dance partner of a pro during the Disco/Hustle era. I studied Argentine Tango for 5 years and even spent some weeks studying with a professional in Buenos Aires. I can follow just about any lead in any dance category, and I also like to dance in the middle of the room when my favorite Keb Mo is playing. Dancing fills and soothes my soul.  There: you now have all of my secrets.

Since dancing is such an integral part of my life, I dance even as I travel so such places as Perth (THE place in the world for ballroom dancing) or Oslo (where I once did an inadvertent exhibition dance in a very darkly lit nightclub with an apparently famous investigative journalist) or Lubbock (this upcoming Wednesday at Last Chance). But my very very favorite dancing experience is with my local ‘Dancing Together’ group that meets several times a week.

Originally part of Gabrielle Roth’s Five Rhythms and a local arm of the Wave dance we called Body Choir, we are a group of around 100 or so people who dance together several times a week. We range in age from around 2 (sometimes tiny babies come also) to 89. Our professions range from folks on food stamps to politicians and doctors, massage therapists and restauranteurs, house painters and artists.

We make up all ethnic groups. Our common love is dancing.  We dance in silence and barefoot for 2 hours, individually, in couples, in groups (whatever flows) to world music that someone creates as per Roth’s Waves – Flowing, Stoccato, Chaos, Lyrical, Stillness. The music may be Latin, or Jitterbug, or Tibetan Drums, or ABBA. It doesn’t matter. We just gotta dance.

Sometimes some of us might end up doing something called Contact Imrpov where our bodies fall against each other’s like cards or dominoes, holding the other up (or, individually, we’d collapse), or rolling around the floor (giggling and playing like puppies).

It opens my heart. Touching and supporting another through music and trust.

My dance this past Sunday morning (and each dance is unique) was quite profound. For some reason, several times I ended up with one or two others doing Contact Improv. To do this requires a sensitivity to offer and receive equal weight (or someone will fall) and a certain level of a meditation so one can integrate into this flowing ‘entity.’

No one leads, yet the dance seems to change from within somehow. Everyone follows, so any domination of one of the members is cause to follow. And then the next person becomes the leader. Or not. It is such a sweet flow. Sortof like a Quaker meeting in which things just happen.

Sunday, as I danced in these pods, I began wondering how one person decided to take the lead for a moment and the others knew, instantly it seemed, to follow, to become receptors, how there seemed to be internal, millisecond agreement to follow each person who imperceptibly took the lead, and how there was no competition: it seemed that there was an equal dominance/receptor equation – each person seemed to take the lead in proportion to the others (men and women taking equal turns leading and following).

How did that flow, that acceptance, that agreement happen – especially with no words spoken? What had to be true for there to be trust in fairness and respect and leadership? Was the non-verbal quality of the experience, or the fact we were all responding to the same music, the difference that makes the difference?

I was thinking about how well-run businesses are similar, or should be anyway. Each person being aware of the greater identity, being fully themselves and offering their talent, while becoming a follower to another’s lead.  An  environment where folks simply trust and respect that everyone will have their own voice and can be nourished and respected, even when another is in charge.

With my upcoming webinar on decision making and influencing with integrity, I’ve begun thinking of leadership, respect, flow, and what influencing is. I keep coming up with new thoughts. Am reading some books on it. It’s certainly a moveable feast at the moment. And I invite you all to join me in thinking about this:

How is dance similar to leadership? Group dynamics? Influencing? And how is trust and respect created and maintained? How do people flow together for the greater good, and know how to serve and respond to each other without competition or roles?

I look forward to having us think about these questions and discuss them together. Who wants to lead?

7 thoughts on “Dancing Together”