What Is The Job Of A Seller? 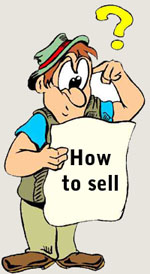 I have a question: if your job is to get people to buy your solution, why do you spend so much time doing stuff that doesn’t bring in business?

I  recently spoke with a sales guy who told me that for two years he’s been making appointments to do presentations for a relatively small ticket solution, and then waiting for a year before 30% of the the buyers purchased. His biggest challenge was getting the appointment. Do the numbers and it turns out that the first 90% of the prospects wouldn’t give him an appointment.

Why would anyone work so hard just to close 3% of their prospects? And why is he getting paid to waste so much time and resource? And And, why does he keep doing it that way if  it’s a failed prospecting model?

Why? Because these sorts of low numbers are expected. Because that’s what sellers do. Because they’ve never learned the process of helping buyers manage their behind-the-scenes decisions they need to make.

The product sale is at the end of the line, after the star. It’s merely a sliver of the buying decision process buyers address on the way to making a purchase. They do the lion’s share of their decision making off-line. That other part of the line, on the left. And you’re not there with them.

So what, exactly, is your job? Buyers are doing the first 80% on their own; you are getting rejected 90% of the time on that sliver because you’re entering the buying decision at the wrong time; and you’re complaining that the buyer is stupid.

Your job is to help buyers make buying decisions – not sell. Sales won’t get you more than what you’re getting now. Is that enough? Seems to me you deserve more.

What needs to happen for you to actually be willing to stop selling, and use another set of skills to help buyers manage their buying decision process?

Let’s change your job to a decision facilitator. Until or unless buyers figure out when or what to buy, and from whom, and their off-line issues are ready to allow them to go through some sort of change, they won’t do anything, regardless of their need and your solution.